Indonesia is rich in the variety of cultural arts and many people should be proud of Indonesia, it is right for the nation and society of this country to preserve and maintain the variety of art and culture in Indonesia. Moreover, this makes the ideology of Indonesian art close to aesthetics, and the discussion of art derived from questioning the sensitivity of this art that is the source of expertise in generating artistic manifestation.

Therefore, it is not impossible if a lot of creation and appearance of works in various customs and cultural arts that are owned by the Indonesian nation is always envied by other nations. The national culture is a culture that is recognized as national identity.

Indonesian Modern Art In The Development Of Indonesian Fine Arts is a form and embodiment of art that is the result of the rules of Western or European art. The development of modern Indonesian art begins from the period of pioneer until the new art period of Indonesia. Here the history of art in Indonesia, as follows:

Raden Saleh Syarif Bustaman (1807-1880) with his achievements is the beginning and is a world class artist from Indonesia and has studied painting in the Netherlands. His precious paintings inspired him upon his return to Indonesia.

Presenting the natural beauty of Indonesian style from painting at this time. Marked the presence of a group of painters such as Arie Smite, Walter Spies, Rudolf Bonnet and R. Locatelli. While following this rule the Indonesian painter is Basoeki Abdullah, Wakidi, Pirngadi and Abdullah Soeryo Soerjosubroto.

Chaired by Agus Jaya Suminta with Secretary S. Sudjojono PERSAGI (Persatuan Ahli Gambar Indonesia) was established in 1938 in Jakarta. In order for Indonesian artists to create Indonesian artworks, this is the goal of PERSAGI.

Painting is used as a tool of political propaganda during the Japanese occupation and the freedom to work as artists are limited. On the cultural hall, Keimin Bunka Shidoso is a container of Indonesian artists such as Otto Jaya, Zaini, Agus Jaya and Kusnadi. Under POETRA (Poesat Tenaga Rakjat) stands an arts institution which took shelter in 1945.

PERSAGI or Persatuan Ahli Gambar Indonesia is chaired by Agus Jaya Suminta and established in 1938 in Jakarta and secretary S. Sudjojono. In order for the artwork created by Indonesian artists can be the personality of Indonesia are the goal of PERSAGI. The painting in this period is to describe nature as beautiful as the paintings itself.

6. The period of art education through formal education (1950)

This year the Indonesian Academy of Fine Arts (now ISI) Yogyakarta stands spearheaded by R.J. Katamsi. In Bandung Pioneered by Prof. Syafe Sumarja is the College of Picture Teachers, then (LPKJ) Jakarta Arts Education Institute and the establishment of the fine art department in every IKIP Negeri.

In 1974 many young artists sprang up like S. Priaka, Harsono, Dede Eri Supria, Nyoman Nuarta, and others. Art at this time with a style freer and growing rapidly and according to developments in the modern era.

The work of local art in the Indonesian archipelago is a manifestation of the pattern of life, belief, or values that exist in the local surrounding area. Art comes from the word which means a beautiful sense when enjoyed by people using the senses of the eyes and ears and can also mean a sense of pleasure when people use the sense of taste. Below are type of artificial arts 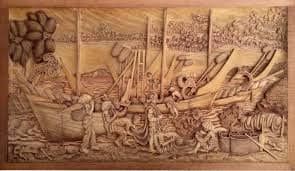 Modern painting begins with the entry of Dutch colonialism in Indonesia. The tendency of western European art at that time to the flow of romance made many Indonesian painters participate in developing this trend.

Initially, Indonesian painters act as more of spectators or assistance, because art education is a luxury that difficult to achieve by the indigenous population. In addition, the price of modern painting equipment is difficult to reach by ordinary residents.

The era of the revolution in Indonesia made many Indonesian painters switch from the themes of romanticism to trend towards the populist movements. Objects associated with the natural beauty of Indonesia is considered a theme that betrays the national interest because it is considered to praise the capitalists who became enemies of the popular communism ideology at that time. The painters then turned to the real portrait of the lower class life and the struggle against the invaders.

The Cultural Manifesto movement aimed at resisting the imposition of communist ideology made painters in the 1950s prefer to free their artwork from certain political interests so that the era of expressionism began. Painting is no longer regarded as a messenger and propaganda tool, but rather as a means of expression of the maker. The belief is still held today. 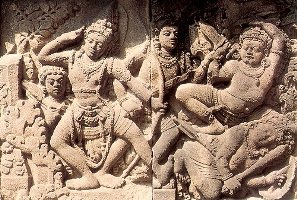 Indonesian art in the form of sculpture originated in the megalithic period that some traditions still survive to this day. Statues in prehistoric times generally symbolize fertility, ancestry, or the founder of the kingdom. Some examples of traditional sculptures are ancestral statues from Nias Island that have naturalist features, square-tipped faces, square noses, and row-like ears. In the Batak area, the most prominent are the grave carving called the Riders, the grave monument depicting a figure sitting on horseback, elephant, lion, or magical forms.

In Kalimantan, the various scales and imaginations of sculpture are produced by Dayak people. The purpose is to commemorate the dead or the ceremony. While in Papua, Asmat tribe produces statues of ancestral figures and placed in a custom house called Tiang Mbis. In today’s modern era, sculptors have worked with various media or materials. The resulting sculptures are a means of expressing ideas whose form has been taken into account. 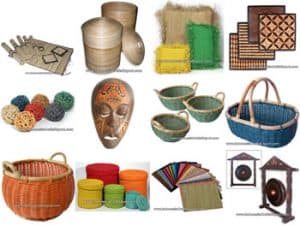 In addition to sculpture, Indonesian art also produces art crafts that have benefits in everyday life. Some forms of crafts are woven arts, weaving, pottery and wood crafts. On the other hand, there are some crafts which originally made by Indonesian people, as follows:

Woven art is a tribal craft that is generally done by rural people in Indonesia. The craft has been blended with the daily activities of traditional communities in producing goods for everyday purposes. The art of wading does not require complicated equipment and the material is found abundantly in the village.

Indonesia has a wealth of pottery making tradition since prehistoric times. The tradition has fulfilled the needs of society for everyday tools and ceremonial objects. Traditional pottery villages are found throughout Indonesia except in Papua.

The abundant supply of timber in Indonesia has long provided raw materials for woodcraft. Among the important wooden craft items in everyday life are household furniture, decorative objects, and complementary items.

Applied art is a work of art used in everyday life which contains a certain functional value in addition to its artistic value. Functions of art can be divided into two, namely aesthetic functions and practical functions. The aesthetic function is a function that is solely designated as ornamental objects, for example, batik or woven work made specifically for wall hangings, crafts items, masks, and vases. While the practical function is a work of art whose main purpose of manufacture is intended as a disposable object, for example, household furniture, tables, chairs, and textiles. Based on the form, the work of applied art can be divided into 4 categories, among others:

Unlike the functions of weapons in the past, the use of traditional weapons today is more often intended as a tool for work. Some also use it as a ritual equipment, custom gear, traditional art performances, and as ornamental objects. For example, Mandau from Borneo, Celurit from Madura, Pasa Timpo from Central Sulawesi, Kujang from West Java and others.

Transportation equipment that still retains its traditional features and features can still be found in the archipelago. For example, boats, horse-drawn carriages, pedicabs, and rickshaws.

Kriya art is very broad, but the outline can be divided into 4 groups, among others:

History of art depicted the transformation of Indonesia today and able to make us understand the evolvement process that makes modern arts to be better appreciated in today’s exhibit. It is the identity that defined Indonesia people from the outside world and needs to be preserved and practiced.