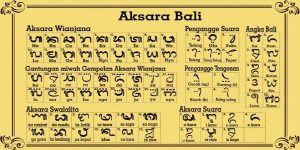 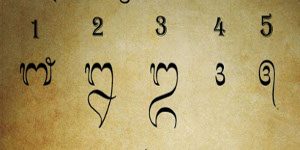 The existence of the Balinese language has quite a complex variation due to the Sor-Singgih system that is determined by the speaker, the person the speaker is talking to, and the things that are discussed.

In general, variations in The Balinese language can be distinguished by 3 dimensions:

Regionally, the Balinese language is divided into two dialects, the Bali Aga dialect (Balinese dialect) and the Mainland Balinese dialect (common dialect), each with its own subdial characteristic. Based on the social dimension, Balinese language based on the Sor-Singgih system or Balinese speech level that closely related to the development history of Balinese people who accustomed with the system of caste, which is divided into Ttriwangsa (Brahmana, Ksatriya, Wesia) and Jaba or Sudra (most people).

Based on this social strata, the language of Bali presents its own history of the level of speech in the layers of traditional society in Bali. On the other hand, in the development of Balinese society in modern times then a new elite was formed which included a class of words that no longer considered for any caste. This new elite is the public officials or the rich that is always respected and honored by the lower classes and this is reflected also in the use of the language. 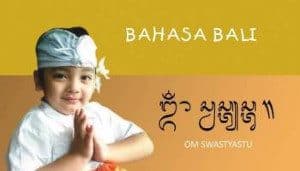 The Balinese language is the oldest Balinese language in Bali which is widely found in the 804 Śaka (882 AD) inscription until the reign of King Anak Wungsu in 904 Śaka (1072 AD). The influence of Javanese (Hindu) culture appears to be growing stronger in the Wungsu Children’s government.

On the other hand, until the 11th century, Javanese developed a variety of Old Javanese language from the common language used in the original Indonesian Javanese called the Kidung. In its development, this language is called the Central Java language (commonly used in the literary variety), which then spreads and develops in Bali side by side with everyday language. Thus in Bali, this Central Java language is evolved into the Balinese language called Tengahan.

In Bali, the Balinese language is well-spoken and is used by authors in the work of literary and arts. Evidently, the number of literary performance born at that time included such as the hymn, Tatwa, Kalpa literature, Kanda, and Babad. In the performing arts, the Balinese language is used in performing arts of masks, Arja, Prembon, wayang, and the like.

The best places to learn The Balinese language is of course by going there yourself to Bali and you should try to learn Bahasa Bali Kepara. Bahasa Bali Kepara (Modern) is the Balinese language that is still alive and used in the context of oral and written communication for the people of Bali until now. The term Kepara in Balinese means commonplace or ordinary which in the Indonesian language means ‘general’.

The Balinese language Kepara (Modern) recognizes two types of spelling, the spelling with the Balinese characters and Latin letters. The naming for this Modern language is because the language of Bali Kepara is still being developed in modern times as it is today. The life and development of Modern Balinese language which is also a mean and vehicle of cultural life, religion, and customs of ethnic Balinese society that developed from the kingdom era, colonization, and until after the independence period.

In the colonial era, especially the important influence on the development of Balinese language that is done during the Dutch colonial era, many schools were established as a means of formal education. The Dutch were able to conquer the kingdoms in Bali from 1846 to 1942. In the early 19th century, before the Japanese occupation, schools began to emerge which was established by the VOC government. Aiming for the people to write, read and learn to count.

From then on, the Balinese language of Kepara (Modern), apart from being developed outside of formal education, was also developed as informal education through teaching and learning process. On the contrary, in the Japanese colonial era, beginning in 1942, the history of the Balinese language of Kepara (Modern) had a darker time because, in addition to no Balinese lessons in school, as well as the number of books in Balinese (Modern) that were burned by the occupying forces.

The fall of Japan in the hands of the Allies forces is exploited by the Indonesian people to liberate themselves. Meanwhile, the Allies again wanted to colonize Indonesia in that causes a physical revolution. The revolution also took place in Bali which caused many teachers in Bali to enter the forest to do guerrilla warfare. The circumstances make the Balinese language development of Kepara not being considered seriously.

Finally, those are complete explanation about language in Bali which every people in Bali, Mostly Balinese people, used it for daily conversation. Hope it can help you when you want to adapt with Bali society.