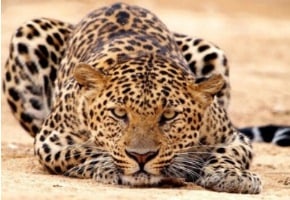 Javan Leopard is one of the four big cats. This animal is also known as a tiger tree for its ability to climb a tree. At first, people thought that the leopard was a hybrid of lions and tigers, so the name “leopard” appeared among early European researchers.

Javan leopard is a fauna of West Java nativity and also categorized as endangered animals in Indonesia.

The characteristics of the Javanese Leopard. Compared to other leopard subspecies, the Java Leopard has a relatively small size. Body length ranges from 100 to 160 cm with a height of 70-105 cm.

Meanwhile, its weight ranges from 50 to 70 kg. The subspecies of the Leopard that endemic to this island of Java has a distinctive color dotted all over his body.  In general, the fur is brownish yellow with black spots. Black spots on his head are smaller. The female Javanese leopard is similar and is smaller than males.

This animal is solitary, except in breeding season. Leopard is a more active hunter for prey in the night. It’s prey consisting of a variety of smaller animals that is usually placed on a tree. Meanwhile, leopards are the only big cats left in Java. The frequency of black type (beetle) is relatively high. This black color occurs due to a recessive allele owned by this animal.

Ministry of Forestry (Kemenhut) revealed the current level of threat to the Leopard Java is quite high. The threat is marked by the loss of natural habitat, habitat fragmentation and declining of prey animals, said Forestry Minister. The Javanese Leopard (panthera pardus melas) is the last big cat species to live in Java after the Javanese tiger (panthera tigris sundaica) was declared extinct in the 1980s. It inhabits a variety of habitats ranging from patches of dense tropical rainforest in the south-western part of the island to the mountains, and to dry deciduous forests and scrub in the east.

Most leopard populations can be found in Gunung Gede Pangrango National Park, although in all national parks in Java it is reported to have found these animals, ranging from Ujung Kulon to Baluran. Based on the loss of forest habitat, illegal fishing, as well as the areas and populations where these animals are found to be very limited, the Javan leopard is evaluated as Critical since 2007 on the IUCN Red List and registered in CITES Appendix I. This animal is protected in Indonesia, In Law No. 5 of 1990 and Government Regulation No.7 / 1999.

below are some facts regarding Javan Leopard:

1. Javan Leopard is a Loner

Unlike lions or tigers who hunt with groups, Javan leopard prefers to roam around the area alone and wait for prey at night. Javan leopard skill dexterity can not be compared with other wild species; They quickly kill their prey and then quietly eat it. With a powerful Claw, like a knife, it will attack the prey from the top of a tree or chase it and then be killed by tearing his prey throat. If a leopard catches and kills its animal prey, it will try to drag its prey carcass to a tree and eat there secretly, to avoid its prey from other predators such as a lion or hyena. Ordinary, Javan leopard hunt antelope, deer and even other animals such as wild boar.

One of Javan Leopard Facts is they are cold-blooded killer. As predatory animals, leopards categorized as cold-blooded animals and use all sorts of ways and opportunities to get their hand on their prey. Leopards never choose which animals that must be prey because all kinds of prey and various sizes can be the target for them.

On the oher hand, the Javan Leopard (Panthera pardus males) as other leopards is a more active nocturnal animal at night. This big cat is one of the animals who are good at climbing and swimming.

However, in keeping with the prey near its habitat, leopards are always hunting for mammals, rodents, fish, birds, monkeys, and other animals that are easy to find. Because of his expertise in attacking prey from the top of the branch and killed it off by biting the neck and pushing it to collapse, leopards are also often called tiger boughs.

In addition, leopards are good at climbing trees that they consider to be the most strategic place when hunting. Especially when they are on a sitting on a branch, the animals they are after located in the middle of the tree are not aware of the existence of a leopard. And at that moment, the ambush from the upper branches shocked its prey immensely so the prey could not escape it. When preyed on the hunted animals from above the limb, then the leopards has 90% chance of successful mission.

Although the animal with the smallest weight than three other big cats, but the leopard is able to lift the animal prey who weighs heavier 2.5 times than his body. And usually, the prey will be eaten on a tree that is considered to be the safest place from other predatory disturbances, like other big cats whose weight is greater than the leopard.

The uniqueness that distinguishes the leopard with other big cats, that is it does not like water. Though all the big cats are reliable swimmers. Even when pressed or hungry and even when their hunted prey runs toward the water, the leopard will choose to leave the prey and search for other prey. However, sometimes the animals they chase do not realize that leopard has fear for the water, so when chased, some animals choose to climb trees to avoid the ambush. Because the leopard is very good at climbing trees, it is almost certain that the animals who climbed to the top of the tree will then die in the hands of the tiger.

On the other hand, the leopard will only approach the water when it feels thirsty and takes a drink in the river. They do not like water, leopards do not put their feet in the river when drinking. Usually, the leopard would stand by the river or stand on the rocks, then bend his head and stick out his tongue. Although the distance to the water is a bit difficult, for leopards they are still possible to achieve without needing to go down to the water.

Their body position is flexibly supported and able to maintain a good balance, as is the case when climbing a tree, in which they never fall. To clean itself, the leopard is not like any other big cat that chooses bathing in the river. The leopard will roll on the ground and end with a waggle so that the dirt on its body let loose or fly away.

Thus, it is not true to claim that all leopard are the same despite the contrast ratio of leopard appearance. For example, the savannah leopard has yellow or orange fur and the leopard that lives in the desert has a light coat. Leopards living in extremely cold conditions have long gray hair and leopard tropical forests have golden feathers. The feathers that covered Leopards can be round or square shape, which is very helpful to camouflage with the environment then the leopard will become less visible and not be seen by the prey.

Therefore, Minister of Forestry affirmed that conservation effort of leopard Java and its habitat should be a priority. Efforts are enforced to preserve the Javan leopard population and avoid its demise. Hunting laws are guarded strictly. The forest areas in Java Island in addition to conservation areas, among others, managed Perhutani, he added, in order to be one place that is safe and adequate for the continuation of the population of the Leopard of Java. In 2005, Gunung Halimun National Park was enlarged to three times its original size for the protection of the Javan leopard, the Javan gibbon, and the Javan hawk-eagle.

Javan Leopard is an animal that brings equilibrium to the wildlife that existed in the jungle. The more efforts we did to preserve Javan Leopard then the better we are at preserving the pristine nature of our forest and with its all inhabitant.

Indonesian Beliefs and Values – (#6 is Important)