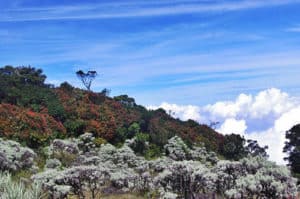 On the other hand, this beautiful flower is very familiar among people who like to hike or climb the mountains and became inspirations for many people through its beauty.

Moreover, this flower also became the symbol of eternity as well. No wonder this flower is also named Everlasting Flower due to its ability to bloom in quite long period of time. Edelweiss flower has white petals and it can bloom during April to August each year.

You also can find this flower on several mountains in Indonesia such as Rinjani Mount, Merbabu Mount, Semeru Mount, and Papandayan Mount. Edelweiss flower is also very popular among tourists as well, not only local tourists but also tourists from other countries outside Indonesia. This flower is usually dried and sold as souvenir.

This is the main reason why this flower became extinct. However, these days the Bromo Tengger National park in Semeru Mount starts to cultivate the Edelweiss flower. Edelweiss and Javanese Edelweiss are also known as Everlasting Flower with Latin name Anaphalis javanica. Below are Edelweiss flower facts that you might not know yet.

The first of Edelweiss flower facts is its discovery. According to the history, Edelweiss flower is first found by German naturalist named Georg Carl Reinwardt. Reinwardt conducted an expedition to Indonesia in 1819. In this expedition, Reinwardt arrived at Gede Mount which is located in West Java.

On the hillside of this mountain, Reinwardt found a beautiful flower that is known today as Edelweiss flower. After found this flower, Reinwardt studied it and since then this flower became more and more popular. Several expeditions also found this flower on other areas such as Semeru Mount and Merbabu Mount.

Edelweiss is a very unique flower. This flower can survive and grow on the highland where other plants will not survive. Edelweiss has roots that are propagated or spread only on the surface of the ground. Usually, this flower has epiphyte characteristic which means this flower needs other plants in symbiotic way so that this flower can absorb water and nutrients in more effective way.

Edelweiss has white leaves. The leaves of this plant are spear shaped with bristle on their surface. The petiole might grow from 3 to 20 cm or even more. The leaves of Edelweiss are also known for their benefits as alternative ingredients for traditional medicine. The most popular part of this plat is definitely its flower.

Even though Edelweiss plant can grow on mountains this plant has really great ability to grow on barren ground where other plants might not be able to grow. This ability is supported by the symbiotic relationship with mycorrhizae.

Mycorrhizae are a type of fungus that lives on volcanic ground. This type of fungus can help the roots of Edelweiss to spread wider on the surface of the ground. As the result of this symbiotic relationship, Edelweiss can get the nutrients and water that it needs for its survival.

As mentioned above, Edelweiss is considered as one of the endangered species in Indonesia. However, there are still many people who take this flower from its natural habitat and bring this flower as souvenir.

Some of them didn’t realize that what they do will make this flower extinct. To protect the existence of this flower, Gede Pangrango National Park is built as the only place for the conservation of this flower. This national park is also considered as the last sanctuary for this flower as well.

Monitoring by the Authorities

If you go on hiking or mount climbing to the habitat of Edelweiss, you can’t take this flower and bring this flower home. These days, some officers will appear on the climbing post on several mountains that became habitat for Edelweiss.

Edelweiss is considered as one of the most popular endemic plants that can be found in Indonesia. This plant not only has very beautiful flower but it’s also considered as endangered species as well.

To build awareness to the status of this plant and as tribute to this beautiful flower, the Indonesian Postal Service printed the picture of this flower on postage stamps in 2003. The designs of the postage stamps that use this flower as their picture show the beauty of Edelweiss in minimalist style. The postage stamps came in nominal of IDR3000. People’s reception to this postal stamp is very positive and more people know the existence of this endangered flower.

If you find Edelweiss is sold on several stalls near the mountains or shops on several cities in Indonesia, these flowers are not taken from its natural habitat. The Edelweiss that is sold on shops came from the cultivations.

Edelweiss in Other Countries

In European countries, this flower is commonly found on the height of 1,700 to 2,700 meters above sea level. Just like in Indonesia, other countries also forbid people to take this flower from its natural habitat.

On the other hand, other countries that issued regulation about protection to this flower are including Germany, Spain, France, Italy, Swiss, Bulgaria, Poland, Slovakia, Romania, and Austria.

The history recorded that in ancient times, people use the extract of Edelweiss flower as medicine to treat various health issues such as dysentery, diarrhea, tuberculosis, and diphtheria. Edelweiss flower also contains high level of antioxidant and has anti-microbe and anti-inflammation properties.