The mystical story is no stranger for Indonesians. Even those who live in big cities like Jakarta many people still believe it. Just by watching television stations and radio every Friday night then you can join the atmosphere of horror that will send a shiver through your spine. No wonder, the film industry that sells everything supernatural-themed turn into a cash machine. The proof of paranormal services, mystical-themed restaurants to tours to haunted places are still in demand by many people to this day because of the unique challenges they may present. 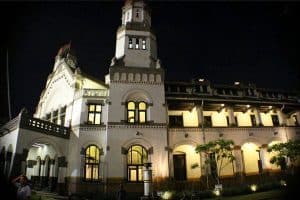 As one of the most haunted places in Indonesia, Lawang Sewu is often used as the location of movie location for some mystery reality show that shows the visions of supernatural beings. During the Japanese Occupation, Lawang Sewu was used as Japanese main base in Semarang.

Meanwhile, the underground passages in Building B were used as prisons where the prisoners were brutally tortured, then their heads were beheaded and stacked in a corner of the room. This may be the reason why the place is still haunted till now. 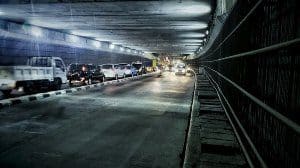 Every morning during rush hour, the Kasablanka Tunnel is widely known for its pretty heavy traffic. This is because the tunnel is one of the main connecting routes between Kampung Melayu and downtown areas. People there are so accustomed to the severity of congestion that occurred in Jalan Kasablanka, to the extent they forget that the road has a haunted story.

When tracing back, Jalan Kasablanka was built in the 80s where the tunnel was crossing Menteng Pulo Cemetery. The removal of tombs and skeletons is rumored to have made the spirits angry and haunted the tunnel ever since. 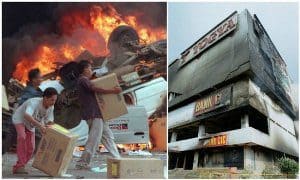 The economic crisis that hit the country at the end of the decade of the 90s triggered chaos and riots everywhere. There were widespread looting, massacres, and rape. No exception on May 15, 1998, when hundreds of looters stormed the Yogya Department Store.

Although in 2000 the shopping center has been rebuilt and operates under the name of Klender Mall, it still keeps a deep trauma for the local people. It is said that there are eight ghosts haunted around the mall, one of them is a mysterious bus passenger who often rides the bus at night, then shortly after the bus drove the passenger then disappeared completely. 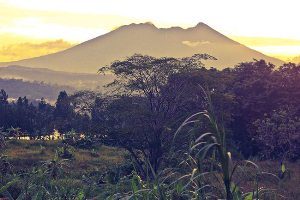 Of the many most haunted locations in Indonesia, Mount Salak is the place that has claimed the most casualties to date, including seven plane crashes that mysteriously occurred. Although not as high as other mountains in Java, to conquer this one mountain is not an easy matter, even for experienced climbers.

In addition to the dangerous pathway, toxic lakes and dangerous gas can often take many victims each year. Those who survived told their horrific experience of continuous circular walking for hours indefinitely in the middle of dense forest.

5. The collision of Bintaro Train and Manggarai Station 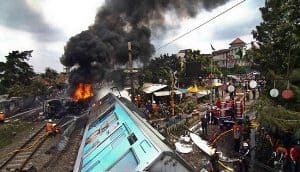 The fateful event of a deadly collision between two trains that occurred on Monday morning, October 19, 1987, in Bintaro, South Jakarta became one of the darkest tragedies in the world of transportation Indonesia.

Moreover, more than 100 lives were dead, some of them even found kilometers away from the scene due to the great impact. While other victims were crushed lifeless under the weight of iron. The condition at that time was really horrible, even it took up to two days to evacuate all the fatalities.

In addition to the appearance of ghosts spirits, supposedly at night when the station was closed, there in the track was often seen empty trains without passengers passing by frightening the locals. 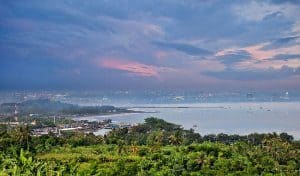 The story of jealousy that occurred in the family of the kingdom of Mataram in the 16th century has taken the sacrifice of a queen who sacrificed herself into the open sea. The tragic legend story is still alive.

About 5 hours drive from Jakarta, precisely in the southern part of Sukabumi, there is a coastal area named Pelabuhan Ratu famous for its white sand and big waves that are quite challenging, especially for the surfer. However, do not get lost by the beauty of the sea, because few tourists who were killed by the waves when holiday there.

Then, most of the victims were male, and reportedly they all wore clothes that had a green element when swimming. That is why it is rumored that the Queen of the South Coast, Nyi Roro Kidul hath wrath and pull them into the sea for wearing her favorite color. 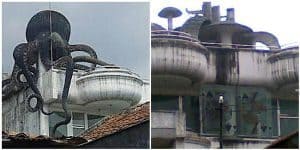 In 2013, a television station tried to unravel rumors about ‘The Church of Satan’ in Bandung. Previously, a giant octopus statue that is on the top of the luxury house has led to speculation of fascination.

From the results of the investigation by a group of journalists, it is known that the ‘octopus house’ is surrounded by several other homes that were built around it, and the only access to get there is through House Number 6. The investigation was ended with a terrible row between journalists and the housekeeper.

Reportedly, someone who claimed to be an ex-congregation of ‘demon church’ reported to the authorities that the house is often used as a place of worship and a place of sex rituals. But until now there has been no concrete evidence to support the statement. 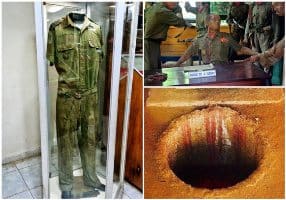 A monument was built as a reminder of the bloody history of Indonesia. Lubang Buaya was the site of the sadistic murder of seven TNI officers in 1965. The event eventually triggered a military coup against President Soekarno.

Perhaps that is why it is said that there are still mysterious crying sounds from the direction of the wells of death, also the sound of footsteps in the museum hallway at midnight. Do not also be surprised, the clothes that are worn by the generals when they were killed are then displayed in this museum in which was still covered in dried blood 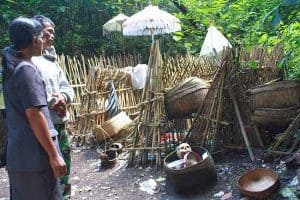 Trunyan Village is not a place for you to be a coward. Located on the shores of Lake Batur, in Kintamani area, residents in this village have different traditions with Balinese people in general. Here, the dead bodies are not cremated or buried. Rather it is decayed in the ‘cage’ of bamboo that is established around the tree of Trunyan. The fragrance that is released from this tree naturally covers the rotten smell of the bodies.

As soon as the corpse had broken down, the remains of the skull and bones were then neatly arranged at the bottom of the temple. Unfortunately, this area is now not open to the public. 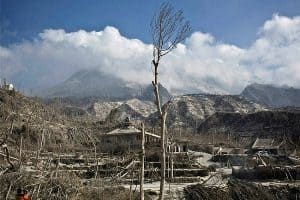 Just like the Yogyakarta government that is run by the kingdom, Mount Merapi is also believed to have its own ruler of the kingdom but an invisible one. Predicted to erupt every five years, this mountain is one of the most active volcanoes in the world. Towering as high as 3000 meters above sea level, the natural beauty around Mount Merapi is able to invite thousands of tourists every year.

However, when late at night, when the climber began to sleep on the slope, here is often heard a hustle and bustle like in the middle of the local market, and accompanied by faint gamelan sound. If you are experiencing stuff like this, usually the climbers prefer to remain silent in the tent and try not to look outside.

There are several haunted places in Indonesia which have its dark history, as follows:

The many haunted places that exist in Indonesia is a testament to the rich culture and history that Indonesian people have and or experienced that still make it entertaining to explore more and to better appreciate the uniqueness that’s truly Indonesia.