There are three types of Indonesian National Flower, Such as: 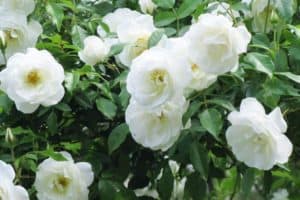 There are many types of Jasmine that can be found in Indonesia. One of them is Arabian Jasmine (Jasminum sambac) is considered as one of the species of Jasmine came from South Asia.

Jasmine also considered as shrub type of plant. Jasmine habitats are originally Hindustan area, Indochina, Malaysia, even to Indonesia. Arabian Jasmine is one of the most common types of Jasmine that can be found in Indonesia and this flower is chosen as one of three Indonesian national flowers. Arabian Jasmine is named as Puspa Bangsa or Nation’s Flower.

Arabian Jasmine is a shrub plant that has straight up stem which grows crawly on posts. This plant is also categorized as annual plant. Arabian Jasmine can grow properly in tropical weather. The types of soil is suitable for Jasmine are including soil with light condition, soil with good porous, soil with sand, or even clayey soil. The flowers of Jasmine came in small size and commonly came in white color. The petals of the flower can be single layer or stacked in multi-layer. The leaves of this plant came in round shape.

Jasmine is the type of flower that has simple petal shape. The flower of this plant came in white color which is commonly associated with pureness or sanctity by many people in Indonesia. Other interesting thing about this flower is its has a very pleasant aroma. The aroma produced by this flower is very soft and calming. That’s why this flower is sometimes used in aroma therapy or as ingredients for products that are usually used for aroma therapy.

Jasmine is the type of plant that doesn’t need high maintenance. Everyone can cultivate this flower without have to use too much effort. In Indonesia, you can find many people that sell Jasmine seedlings.

Then, the price of the seedlings and the price of the flowers of this plant are relatively affordable. No wonder that Jasmine is usually considered as people’s flower in Indonesia because this type of flower can be afforded by almost any class of Indonesian people.

The Jasmine plant can be found easily on many residences as hedgerows. This plant also grows naturally in front yard of many residence areas as well. Even though this plant originally came from India, jasmine has grown in Indonesia for many years. This flower is used for various purposes. One of the most common uses of Jasmine is as accessories in many traditional ceremonies. Traditional ceremonies in several parts of Indonesia usually use Jasmine as accessories or offerings.

Jasmine’s flower also has so many health benefits and commonly used by Indonesian people as traditional medicine. Some people in Indonesia even consider Jasmine as one of the most useful home remedies. One of the health benefits that you can get from Jasmine is this flower can help reduce your stress. The aroma produced by jasmine can make you calm and more relax.

Besides can be used to reduce stress, Jasmine also can be used for detoxification as well. These days, you can find Jasmine Tea easily on the market which is the type of tea that is made from the combination of tea and Jasmine. Jasmine tea is considered good for detoxification. Moreover, consuming Jasmine tea can help your body removes the toxin in more effective way.

You can grow Jasmine on your front yard. You also can grow this type of flower on pot as well. Growing Jasmine is relatively easy. This type of flower doesn’t need extensive maintenance and you can grow it without have to spend too much time. As long as you pay attention to the weeds and remove them immediately, give enough fertilizer, and water the plant regularly, your Jasmine will grow properly.

These days Jasmine cultivation has become one of the most popular businesses in Indonesia. There are many people try to cultivate this plant in huge scale. Thus, in order to sell the plant to other people. The flower of this plant is also sold in many places around Indonesia, especially when there is a traditional ceremony that requires you to use this type of flower. The price of the Jasmine flower is very affordable. The flower of this plant is also usually used in traditional wedding procession as well.

Since it can grow easily in Indonesia and almost every people in Indonesia know this flower, no wonder that this flower is chosen as Nation’s Flower. Jasmine is also the type of flower that offers so many benefits and can be used for so many purposes. 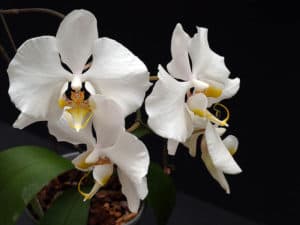 The second flower that is chosen as one of three Indonesian national flowers is Moth Orchid (Phalaenopsis amabilis). There are so many types of Orchids that you can find in Indonesia.

Orchid is considered as exotic flower that has so many fans in Indonesia. Among so many types of Orchid that can be found in Indonesia, Moth Orchid is the type of orchid that is chosen as Charm Flower of Indonesian national flowers.

The Moth Orchid is the type of orchid that has very distinctive appearance. Moth Orchid has flower with wide sized petals.

Moth Orchid is originally found by Dutch botanist, Dr. C.L. Blume. Blume also had become the director of Lands Platentuin or now known as Bogor Botanical Garden. This type of Orchid has habitats that spread across Indonesia, Malaysia, Papua, Philippines, and even Australia. Moth Orchid can grow properly on land up to 600 meters above the sea level. Like almost Orchids, Moth Orchid grows as epiphyte plant that sticks to other plant’s trunk or branch in the forest.

The Moth Orchid, just like most Orchids, is originally considered as the type of plant that can grow naturally in forests or in the wild. After it’s being found by Blume, there are more and more people try to cultivate this type of orchid in their own garden. Cultivating and growing Moth Orchid can be quite difficult sometimes, especially for those of you who don’t have basic knowledge in gardening. However, if you have willing to learn, you will be able to cultivate and grow this type of orchid on your own garden.

Other reason that makes Moth Orchid is chosen as Charm Flower of Indonesia. Thus, the shape of the flower, structure, and the color of the flower are represent the values and philosophy of Pancasila (Indonesian’s state symbol). Last but not least, Moth Orchid is the type of plant with flowers that can last longer compared to other types of flower. The flower bud can grows more than 60 buds on each stem.

Moth Orchid has become one of the most favorite types of Orchid in Indonesia. The price of this type of Orchid is quite affordable compared to other type of Orchid. However, if the flower blooms, the price of the plant can increase. The maintenance of this plant is also not too difficult. As long as you can pay attention to the condition of this plant generally, you will be able to grow Moth Orchid properly. Sometimes, people who grow Moth Orchid might join competition or contest that is held for people who are Orchid enthusiast. 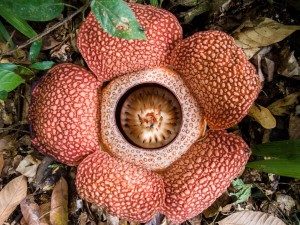 The shape of this plan is very unique as well. This plant doesn’t have any trunk or stem. It also doesn’t have any leaves and true roots as well. Since this plant has a very unique shape, there are many people who are interested and want to see this flower directly by coming to National Park where this flower grows. Rafflesia Arnoldi is the type of plant that grows as endoparasite in other plant that plays role as host. The only part of this plant that can be seen outside the host plant is its flower that came with five large sized petals.

However, until today,there are no ones who can cultivate Rafflesia outside its natural habitat. And when the roots or the trunks of the host plant dies, the Rafflesia will die as well. This is why Rafflesia needs primary forest as its habitat in order to survive. Maybe this is also one of the reasons why this plan is chosen as Rare Flower of the Indonesian National Flowers. Besides it only came in very small number in all over Indonesian, this flower also can’t be cultivated which makes it becomes more unique and rare.

All of those flower are identified as National Flower. Its because each of them has an unique characteristics as well as can describe Indonesia in three words. Pure, Wisdom, and Elegant. Therefore, the existences of those flower must be kept and maintained for a long time.