Home » Food and Beverage » Appetizing 15 Side Dishes of Indonesia

Appetizing 15 Side Dishes of Indonesia

The things like crackers or as usually we call as Kerupuk is a mush have in every house. No wonder, there’s this Kerupuk Sellers going around the houses every morning to sell some more. But, beside the famous Kerupuk, there are some other side dishes that you shoudl try, or at least know. Here are the fifteen of them, all included in our list with the title side dish of Indonesia. Make sure to check them below : 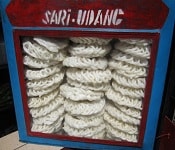 The most famous one and easily get is the ordinary Kerupuk. People usually refer this as the White Kerupuk, because it colored white based on the flour it used. Usually you can find this one in some small restaurants, especially for the stall called Warteg.

The price of it is really cheap, that’s why it’ so affordable for all people in Indonesia. Just a little bit of this Kerupuk can change your eating mood. The crunchy crackers is the best thing to eat afterwards after having a taste of your meal. With such a low price and good taste, it’s not a sin to have a big square can of it at your own home. 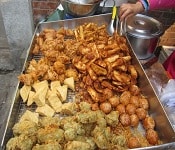 The next is Gorengan, which also the next famous side dish beside the Kerupuk. Unlike the Kerupuk that eaten while having meal in the same time, people usually eat the Gorengan after they finish eating the food.

With the special sauce called Petis Sauce, no one can resist the power of Gorengan. They can choose what’s he thing they really love, like fried banana, fried tempeh, fried tofu, and also the other fried stuff. Gorengan also available in some Warungs or stalls in Indonesia, especialy Warung Kopi. 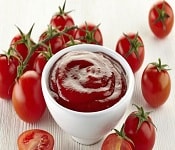 Like you always knew, Indonesia has so many choices in the world of sauce. As the first example, we want to introduce you with the Indonesian Tomato Sauce. The Tomato Sauce in Indonesia is just some sauce that made from, of course, a tomato.

You can find two versions of it in Indonesia, the packes in bottle one, or maybe just the sauce that packed in a plastic. For the brand, there are so many kind of brands here, but you can choose what people around you recommended, like the ABC for example. But beside that you can also try th other tomato sauce to fell the different. 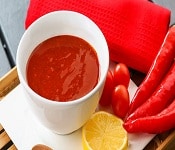 Beside the tomato sauce, there’s always chilli sauce somewhere in Indonesia. Indonesian people love the spicty stuff, especially the thing that combined with the chilli sauce. The thing is, youan combine this chilii sauce with so many foods.

You can add  it to bakso, you can add it to some rice, you can add it on some toppings, adn even you can add some sauce on Kerupuk. Different flavor can be found on different brand, so be sure to pick the one that you love the most. 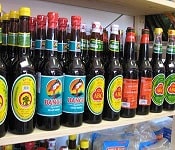 The Swet Siy Sauce also can be a good thing to add into your foods. But, the main use is for the additional taste to the traditional food called Satay. They always use the Sweet Soy Sauce to make the sweetness came out of the meats. With the charcoal cooking, the Satay will be much better with the Sweet Soya Sauce. You should try it yourself. 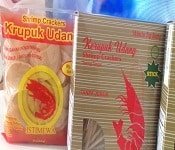 Another form of a Kerupuk is this Shrimp Kerupuk. As it name implies, the Kerupuk is made from te shrimp meat that has the fresh and tasteful flavor. You can also find the same taste at the other Fish Kerupuk out there.

This kind of Kerupuk is best to deal with the other traditional foods like Rawon and Soto. Both has their own sauce that really good to taste with the Shrimp Kerupuk. You should pick one of the Shrimp Kerupuk, and try them for yourself. 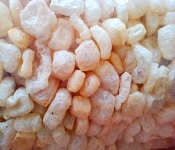 After the White and also the Shrimp Kerupuk, another Kerupuk we want to tell you is this Kerupuk Kulit. Kulit means skin in Indonesian. So, this Kerupuk has the basic ingredient, which is the cows skin. They are quite thin and eatable actually, but the must going through several process first to actually ready to made into some Kerupuk. 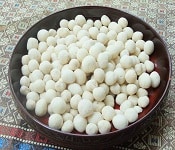 Pilus is like processed Peas. The ordinary peas enter the new processin wih some flour. Thus, the Polus created, the peas or peanuts that covered in a crunchy white skin. You can even eat the skin first before eating its core.

There are so many kinds of Pilus in Indonesia, it also came with so many flavors. Until now, there are some flavors of it like the Spicy, Salted, and the Pilus that has the flavor of BBQ or some stuff. They can be eaten really well wile having any kind of traditional foods of Indonesia. 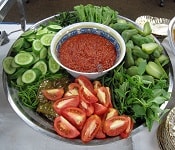 If you’re a true lover of Tempeh Penyet, Tofu Penyet, Fish Penyet, or the other Penyet things, you should remember this Lalapan. Lalapan is a line of vegetables that you can find in your plate, located just beside your rice.

Usually lalapans contains some kind of vegetables like tomato, cucumber, and peas. But the things that contained in Lalapan is fully based on the seller. Nevertheless, Lalapan is alwas a great thing to wash your mouth after eating. 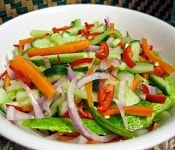 Just the same like Lalapan, Pickels also contain some vegetables, but they combined with this kind of sweet, fresh, and little bit sticky sauce. You can’t see the colour of the sauce becasue it’s just having this invicible white colour. But sure, it’s sticky.

After trying the 10 side dish above, you must try these other side dishes of Indonesia that you can easily find around !

That’s out list of the traditional side dish that you can find almost in every restaurant in Indonesia. Some of them can be home made if you want. With those side dishes, your eating moment will be much better, it’s like having a friend to accompany you for that breakfast, lunch, or dinner. Even though they are not essential but the foods are much better when they are around.

So, be sure to at least have one kind of side dish to make your food better in a way. Pick the right side dish for your own food, and feel the different between eating food with side dish and eating while not having sie dish at all. The only thing that can judge is your tongue.