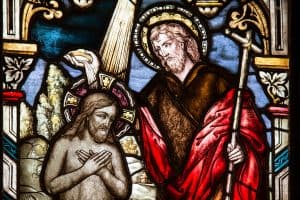 Nowadays, Indonesia is fame in the middle of earth because the violence. The Diversity in Indonesia make Indonesia extremely difficult to unite as well. Although motto “Unity in Diversity” applicable, there some people disobey that motto. Those people is the main causes of violence in Indonesia maybe. One of the fame case is violence of religious. Which is commit by some Muslim groups in Indonesia.

As we know, there are many Religion in Indonesia. Christian is the rare one in Indonesia also the other religions. From 263.5 million population in Indonesia, Christian only take a little part. Its only about 31.9 million Christians. If we make comparism, the number many many times down the Muslim inhabitants.

We all know, majority of religion in Indonesia is Muslim. The percentage is almost 80%. That’s why Muslim could find everywhere. Especially in Java, Sumatera, and also in the rural districts.

The number of Christian make them rare. As a minorities, Christian get sifgnificant danger often. One example for the danger is persecution. Christian persecution is any hostility given to people who identificate as a Christian. For living, they must pay a bit higher than the other because they are Christian. Thus, they are really hard to find a house. Not only that, beatings, physical torture, isolation, rape, slavery, imprisonment, even death are given to Christian. So rude, right?

In Indonesia, those cases are happened. Christian do not allow to built their worship house as well. If its possible, they must cope plenty challenge. Many conflict comes one by one to unsupport the construction of church. If the construction be continue, the Christian must accept the punishment. Such an imprisonment or maybe killed.

The real example of Christian persecution in Indonesia shown below: 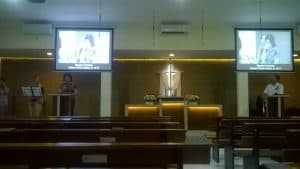 One real case happening on GKI Pos Adisucipto in Berbah District of Sleman, Yogyakarta. The rejection to built church as a negotiation among Christian and Muslim as well. Christian known as a new coming people in that area. That’s why, the whole process need a long adaptation.

The difference of perception of each group became factor of lack in term of communication between. The dilemma of GKI Pos Adisucipto’s member in Berbah is not allowed to built their worship house. Then, the members acknowledge that act as a conflict. Because that is due to religious violence.

The violence itself happened because there is a controversial between them. What is the point of set up the worship house? Its alright if the whole process is difficult. However, the people in that area not supposed to do that. If that case happened longer, maybe violence pop up as its possible. The conflict also causes violence either physically and non-physically.

From that case, we can conclude the lack is not only because the religious factor. But also because the cultural values among society. The lack of inter-religious pluralism values sometimes become barrier in religious life in Indonesia. 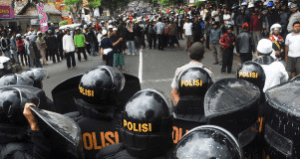 Right on February 2011, there is an unrest in Temanggung, Central Java. The priest, Antonius Rechmon Bawengan must put in the jail because the simple act he does. He is discover spreading a book titled “Ya Tuhanku, Tertipu Aku!”. The book consists with an interpretation of Nabi Mohammad and physical symbol clingy on Muslim building in Arab. The Antonius’ dark campaign expand fastly, and finally enter in Temanggung. When his book accepted by a strange family, one of the family member directly report him to the police.

Rapidly, Antonius put into the jail because he discover already insult Muslim religious. He will imprisoned in 5 years. But the Muslim disagree with the penalty. They really want Antonius accept the fair penalty, such a death penalty. This unsatisfy feelings make unrest emerged. Not only in Temanggung but also in the middle of town. 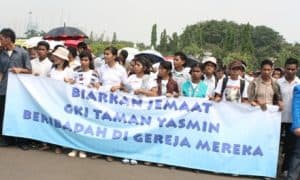 GKI Taman Yasmin located in KH. Abdullah Bin Nuh Street, West Bogor, Indonesia. It was in 2011, when 300 Christians go to demonstrate in front of National Palace. Indonesia was led by Susilo Bambang Yudhoyono. This is the first demonstration which is conducted by Christian. They do demonstrate because the government in Bogor revoke building rights of GKI Taman Yasmin. Then, the members cannot worshipping as usual in the church.

Although the legitimatize given by Mahkamah Agung, the government persistent not allowing the members to worshipping. Addition, the Muslim around accuse that GKI try to spread Christianity in that area. That’s why they persistent to reject GKI Taman Yasmin to be open in the area. Nonetheless, the demonstration not happen as the common demonstration. Because its quite peaceful. They only want SBY try to uphold the justice. By allowing them to open their worship house, and its over. There’s no demonstration anymore, there’s no physical and non-physical violence.

4. The Church Explosion in Samarinda 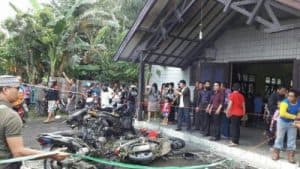 Are you still remember when one church in Samarinda exploding by Molotov bomb? The explosion occur on 10:00 WITA when the people just finished their worship. When the worship ended, there is a strange who throw up something, look like a bomb.

After doing that, the strange guy escape himself into the Mataram River. The people around that place run over him and finally he arrested. Thus, he taking to the police and serve the punishment.

The explosion succeed taking many people lifes. Many people consume that tragedy as a persecution of religious. That is savage and vile.

Further, innocent people become the victim. They just completely their worship, then people come to take their life? Fortunately, the victim not too much. But people, especially families of victims ask the police to take quick action. They wanna know the main purpose the strange doing explosion.

There are many lack among Christian and Muslim in Indonesia. However, those four represents the persecution in Indonesia. If we look back, Christian already encounter a difficult phases. Especially when it was a Crusade in 1099. When Christian take over the Yerusalem and doing murder almost to all inhabitant. Christian persecution to Muslim in Israel maybe give impact to Muslim groups and community in Indonesia. They disagree towards Israel action. Especially when Israel bombing and distracting Muslim’s life. Further, there’s no serious follow-up action from another country in the world.

Although Christian and Muslim are not unite usually cannot going along together because the differences of principle, but motto “Unity in Diversity” must be applied. The main purpose is to avoid violence or maybe persecution between both religion. Hopefully Indonesia become a peaceful country. Therefore there are no more violence such as Christian Persecution in Indonesia.