In Indonesia, maybe the common thing that people always hunt for is the attractions. There are so many of them in here, and usually the foreigners coming in here looking for the natural ones that exist in the land of Indonesia. The tourists want to seek a better place for resting, and then just enjoying what’s nature provided for them. They really love it because in their own country, it’s a little bit hard and confusing to find a place like Indonesia.

Some people from abroad also coming to Indonesia, to hunt for the natural things like seeing endemic and rare animals, and also looking for the endemic flora in Indonesia. One greenest country in the world of course has something for you here. And we will tell you 15 of them in this list of beautiful endemic flora in Indonesia. All consist of the hidden, common, and even the rare endemic flora that still exist somewhere in this country. So, withouth further do, let’s see the first flora on our list ! 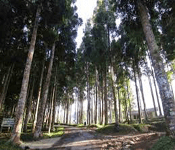 The first flora right here that included in the article of beautiful endemic flora is none other than the Damar. What’s this Damar? It’s one valuable tree that exists in the land of Papua. The tree has some benefits that have been exploited.

Inside this tree, there’s its sap that can be used for so many kinds of product. That why people started to exploit them, because it’s very useful for their business. Beside the sap, the tree trunk can also be taken for so many stuff. 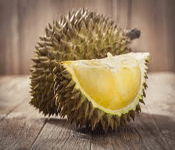 This fruits is not strange anymore to the poeple in the world now. But then, people still not so familiar with this kind of fruit, because the fruit itself only known to bean endemic flora of Indonesia. That’s why, the Jakarta city was named Big Durian, because of this.

The smell is not that good, even for some people, the small can make the dizzy for a while because it’s so strong as the smell of alcohol. But inside, there are the fruits that people love. Even in Indonesia, people making kinds of stuff based on this fruit like ice cream, sandwiches, and stuff. 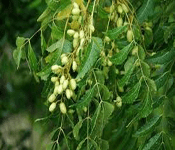 What’s the deal about this flora called Mimba? Is it related to Simba? Unfortunately not. Mimba is one florat that has very long size. Even its tree can reach up more than 20 meters. Some people found so many dificulties to distinguish this flora with other else.

But the most significant charcteristic is the trunk skin. It’s not smooth, and having this kind of fin texture. The mimba fruits can also be found way higher to the tree. They are only 1 cm fruits  that can be used as natural pesticide. So, the farmers can get their own way to maybe plant one or more at their garden. 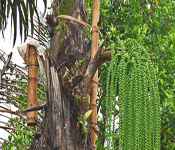 Talking about the tall and gigantic flora of Indonesia, we cannot skip this one, Enau. Enau is also having almost the same descriptions with the flora above. Its tree can grow up to 20 meters and having almost 50 cm wide.

It’s really wild. Surprisingly enough, this flora can produce sugar too! As an alternative, this can be really helpful especially if you doing some camping or other foresty activities. Also, the leaves can be processed to be broom. 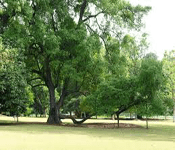 And the next one we have one unique flora again named Tembesu. This one is really beautiful actually, you can even decorate it if you want. With some lights and small dcorations, it can be one wonderful christmas tree.

Aside from that, this flora is mainly found in some areas like Sumatra, Borneo, Sulawesi, and also West Java. Surpassing the two floras above, this tree can grow up to 25 meters high. What a tall christmas tree. The wood also looks beautiful with its gradating gold colour. 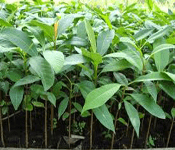 Moving from there, there’s one flora again that we’re gonna talk about in this article called Jelutung. This Jelutung is considered as a family tree member, because it’s not small at all. One adult Jelutung can reach about 60 meters high from the ground. Fanastic.

This tree can give you so many benefits, based on how you process it. You can make a bubble gum out of its sap, when it’s being processed properly, one should create a gum easily from this tree. Also, the trunk can be useful to be furnitures. 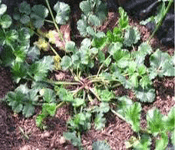 If we talk about one flora that can be used to treat some diseases, then we can have the Purwaceng plant with us. It looks more like a root than a flower. In the area in Java island, the people use it as a medicine when combined with water and other ingredients.

With its useful nutrition inside, the people of Central Java can even make it to be a natural suppement that can increase stamina. And maybe that’s why, this Purwaceng usually be called as the traditional Viagra. 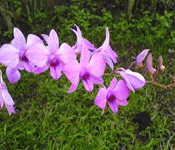 Starting from this sequence until the 9th information, we want to tell you about some kinds of orchid in Indonesia. There are some notably endemic orchids of Indonesia, but let’s go with the first one, the Larat Orchid.

From the picture we have provided, you can agree that this one is a commong orchid thatc an be found in some flower markets in Indonesia. The people usually have this flower to decorate the room and make its smell more good. 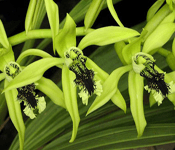 Another kind of orchid is the Black orchid. This one is extraordinary one. If the usual flowers have like the colourful skin, it’s totally different with this orchid. This flower has a pale colour, that almost looks like it’s dying.

These days, you can find this kind of flower easily, except in the conservations. The Black orchid is really rare now, even in the forest areas of Indonesia. Also, it has several nickames, like Kersik Luai from Borneo island. 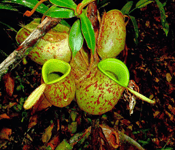 A thing that also has a name Nephentes, looks so different from the other plantation around. Kantong Semar has green colour rather than purple or yellowish colour. This flore inhabits tropical forest areas like in the Boreno island or Sumatra island. Well, the fact tells us that this carnivore flower can grow up to 15 till 20 meters, it’s absurd.

This flora really loves to hunt some small creatures like frogs and insects. But, this plant is also can be found in the areas around South East Asia. But sadly, it’s not getting much of attention, and maybe that’s why its critical status keep getting worse day by day. It has dangered status now. 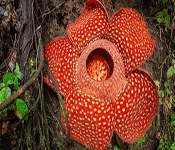 And for the last one on our list of the wonderful flora of Indonesia, is the Rafflesia Arnoldi. Known as Bunga Bangkai or the Corpse Flower, because its smell is so bad, almost like the smell of a corpse. Found firstly in the area of Sumatra island in the 1818 by the famous Thomas Raffles. This flower was named after him. Sadly fact again, this flower still considered in rare flora category.

The number of this plantation keeps decreasing because of the open land policy that getting rid of this flower from its own habitat. Also, there’s no strong conservation in here that can increase its numbers.

So, to complete our list of endemic flora in Indonesia, we want to provide you the other information like usual. Basically some of the flora below can also be found in some othere regions beside Indonesia.

That is our list of the endemic flora in Indonesia that you should know if you interested enough about the natural ecosystem or environment. All of them are beautiful things ever, and mostly can ony be found in the tropical areas like Indonesia.

If you wan to actually see them, you don’t need to crossing the jungle and foresty areas by yourself. You can go to the conservation areas in Indonesia, and see them directly. Beside seeing the flora, you can also check the rare animals that also ihabit in it. Visiting that location would be very pleasureable experience that you’ll get once in your life.

10 Different Types of Grass in Indonesia

15 Popular Flower in Bali That Loved by...