Nothing more good beside having some snacks during the day. Well, in Indonesia, you can find so many of them here, ranging from the sweet ones, to the most salty ones. The foods already designed to the Indonesian people tongue, so they must be rich in flavor and of course, they are not tasteless at all.

The snacks also come in different forms, the sturdy ones or you can choose the easy to swallow snacks that have very soft texture. Beside choosing the best form and also the snacks that have the best flavor for you, you should prefer to eat these Indonesian traditional snacks beside having the junk foods that sold in some restaurants, becasue they are very healthy and also considered so cheap. Also, they can be found easily in the traditional markets out there. So what are the best traditional snacks in Indonesia? 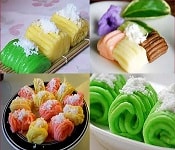 The first one on our list of delicious traditional snacks of Indonesia, we havethis Getuk Lindri. We already talked about this food in some of our articles before, so let’s talk about this once again, in a short version.

For you who still unfamiliar with this Getuk Lindir, this one is the snack made from sweet potato. Sometimes, people chane the basic ingredient with the cassavam and add some sugar on it. The Getuk Lindir comes with more colorful colour then the original Getuk. 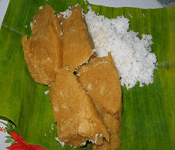 Then here’s the original Getuk we’re talking about in the previous Getuk Lindir part above. Born with the yellow or chocolate colour, this Getuk has the sweet taste, just the same as the Getuk Lindri. This one is more simple to make, becasue it doesn’t need any colour addition.

You can make it yourself in your homes, by following some tutorials on the internet, they are really helpful. This can be a great choice of having some relaxation in the evening, or maybe you can serve this as a snack to eat with friends. 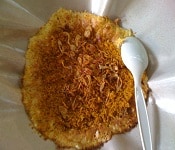 If the Getuk and Getuk Lindri above is the familiar local snacks for East Java people, this Kerak Telor is really famous in the Jakarta City, located in the Special Region of Jakarta. You can find some vendors of it easily by the road side, or maybe in some small stalls.

This is basically the egg that usually we can find every day, but combined with the additional spices. The use the rice to make the dough more firm and easy to eat. With the additional toppings, the taste of Kerak Telor will be much better. 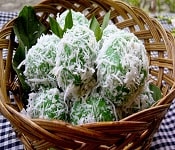 You can find this Klepon almost in every region in the island of Java. Eben though there’s some forms of Klepon, but the known version of Klepon is the green ball with the coconut on top of it. Inside, you can find more sweetness, made from the javanese sugar.

Usually, the Klepon packaged in a small pack. In one pack, usually filled with 4 or more Klepon.Bascially you can find this in the traditional cake stores  that usually located beside the traditional markets. You should find one there. 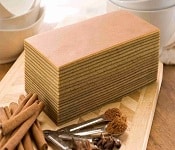 The next one is Lapis Legit. This snack is very sweety one, perfect for you who love the sweet snacks to eat during your free time. The price of this snack is also ranging, depending on its quality. Usually the branded one will be more expensive than the one that sold with no brand, or just sold in a plastic.

But, any kind of Lapis Legit will be a stomach filler. Because the portionf of it is always big, and usually can fill one whole family. Remember, the Lapis Legit is different from the original Lapis, this Lapis Legit has the chocolate colour, with some black stripes. 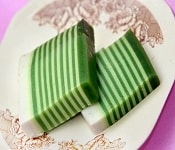 This is the original version of Lapis, much much different from the Lapis Legit above. This Lapis is way smaller than Lapis Legit, and having softer texture. This is more like jelly-ish snack, usually packed in a plastic to make you more easy to consume it.

If you want to east the non fat, easy to swallow, and a snack that light in weight, than this Lapis is really suit you. The Lapis also very fresh, and more better if contained in a cooler, after adding some fruity toppings on it first. 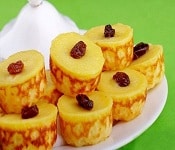 The next one is every one’s favorite, a little snack that really easy to find called Kue Lumpur, or Lumpur Cake.You can find this one easily in front of every traditional markets, and sold with a really cheap price for a cake.

Having some shape that look like the other snack called Surabi, this Lumpur cake is considered as the wet snack. Beside having the wet and sof texture, the smell of it is really good, and having more complete taste with the addition of raisin on the top. 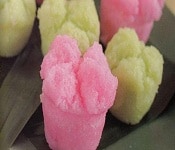 In the number 8, we have the Indonesian cup cake, or usually called by the people as Kue Mangkok. Do you some similarities between this version of cup cake and the cup cake in your country? Maybe some of the basic ingredients are different, but talking of form, it’s almost the same.

Usually the people of Indonesia us the way of cooking called Kukus, which basically mean that the cakes will be steamed in a Dandang, a large metal vessel for steaming rice. And about the main ingredients, you only need some portions of rice flour, wheat flour, and some sugar to make it more sweet. You can also add some colour if you want. 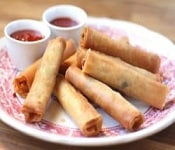 Who doesn’t know Lumpia? For Indonesian people, this is a snack that really good to eat when travelling somewhere. You can easily find it on the road. While waiting for the green lamp, you can se some sellers in here selling those Lumpias.

Of course, for the hungry travellers, this can be a great companion and great helper to fulfill the empty stomach. Usually the Lumpia comes  with its spicy sauce or some chili. The snack is balance between the stomach filling crust, and also the healthy vegetables inside. 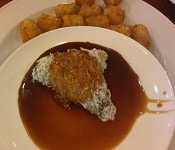 The next is Lupis. Again, this is one of the famous snacks in the land of Java, and really famous in some regions like East and Central Java.        This snack is usually eaten during the morning, as a food for breakfast, or maybe during evening with some tea.

The making of it is really simple, maybe that’s why so many people, especially young mothers, is making this snack as their favorite. The basic ingredients is the Ketan, and added with some sweet Aren sugar and coconut. 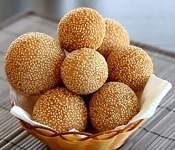 The next is Onde-onde. Who doesn’t love this snack. Beside can be found easily in your nearest cake shopt, especial the ones you can find near traditional market, the Onde-onde is anitheer way to make people be creative with their food.

Onde-onde is usually filled with the mung beans, but some people made ther own Onde-onde that has so many different inner, like chocolate, cheese, pinneaple, and the others. So, you should try your favorite if you want. 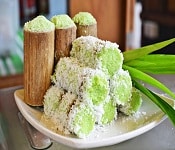 The famous snack in the land of East Java. Everyone in this specific province surely know about this special snack. Snack that usually sold during the night, by the famous Putu sellers. Why they are so famous? Because of their own special way to sell the Putu.

They usually bring their own wagon, that has the unique sound everyone can’t miss. The “Tuuu” sound is th sign that the seller who bring the wagon is the actual Putu seller. There must be some people finally come out from their home, and start to buy some. 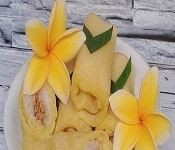 The next one is called Semar Mendem. This one has almost the same texture as the other sanck called Lemper. If Lemper is only served with the banana leaf, Semar Mendem is covered with the combination between an egg with the with flour.

The combination used as the cover of Semar Mendem is the only different between this snack and Lemper. But both of them have the same basic ingredients, like the white ketan and the chicken meat inside. 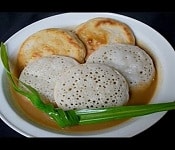 We have the other two snacks in here, both called with the name of Serabi. Let’s talk about the original Serabi first. There are two types of Serabi, the one is sweet, and the other is the salty one. The second choice however, has so many kinds of topping.

For example, in the city of Bandung, there are many kinds of Serabi, each of them has their own unique topping, like sausage, cheese, and egg. And for the sweet one, hahing sweeter toppings like javanese sugar, and kinca. 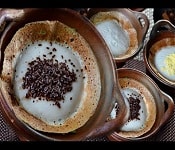 The next Serabi is the specialy Serabi that commonly found in the area of Solo. This one is considered as the sweet Serabi, becuse the toppings used are mainly have the sweet taste, like the chocolate sprinkles, cheese, and chocolate chunk.

You can also add some syrup on it too, and the taste will be much greater. If you want the taste the most fampus Serabi Solo, you should come to the area of Notokusuman to try its best Serabi Solo called the Notosuman Serabi.

So those are the best traditional snacks in Indonesia that you should try. All of them are really good, and having their own unique taste, which can suit different people. You can take much of them though, because you can almost get them all with the lowest price possible in your nearest traditional market. Find your best ones, and good luck!

13 Most Famous Musical Instruments in Indonesia

10 Kinds of Weather in Indonesia You Must Know